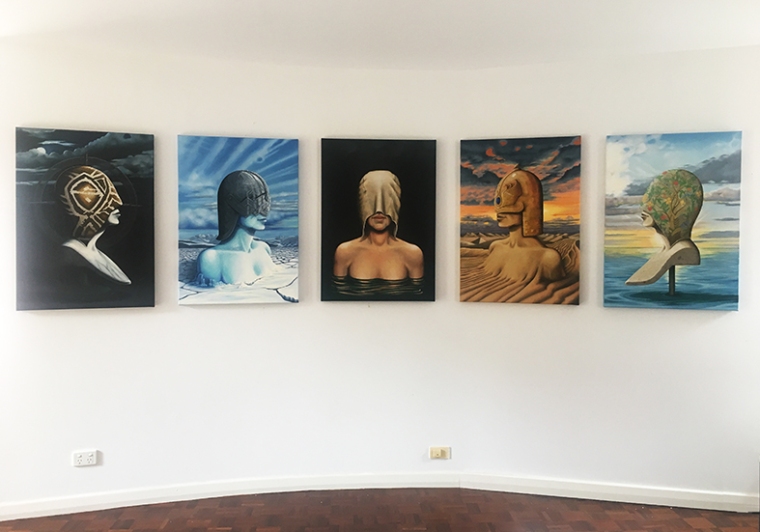 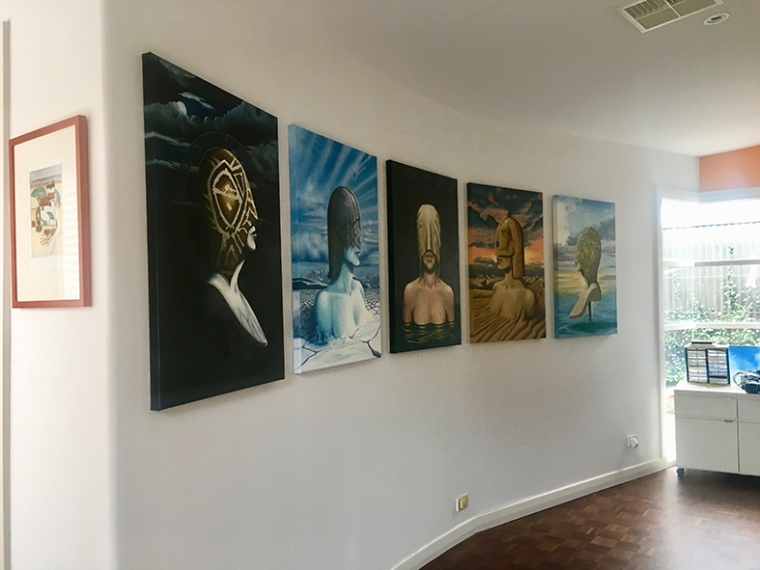 I believe that the environment we live in affects our ability to create. Therefore sometimes it is necessary to create the environment first. Well, this is what works for me, and is why it has taken five years to complete the environment for creativity to fully blossom. The environment I talk of is mostly exterior and therefore visual, however there is a flow through to the interior environment as a result of having a suitable space to work from. The renovations to the studio were in fact completed in 2015, but the renovation to my life was still a work in progress.

Last weekend I finally “hung” my body of work from the recently completed and final year of an Arts degree (Bachelor of Visual Art), onto the walls of my studio. Interestingly (as you can see) there are no body’s, and the portraits wear headgear reminiscent of a death mask.  I started with only two portraits and ended up doing five, and ironic that in the end they all fitted so perfectly onto this funny curved wall which is the main hanging space in the studio. It was as if I had somehow subconsciously painted these portraits to suit my studio; the middle one of me emerging from the dark, smack bang in the middle and the others facing inward, surrounding me in support.

Titled ‘The Immortal Soul’, this recently completed body of work explores my life experiences and spiritual beliefs. Through a combination of mythological, psychological and symbolic imagery, these paintings reflect facets of my persona. The sequence of five paintings is structured around the idea of personality archetypes as defined by Carl Jung and depicted through the language of surrealism. The masked aspect is symbolic of death. Through the executioners hood I reflect on my existential approach to life and how I have reinvented myself many times over. The hoods therefore speak of endings and new beginnings. All the portraits of the archetypes explore the concept that humans have two basic natures, the physical and the spiritual. They represent psychic intuition: the unseen inner life, which guides me in the physical world.

When I stood back and looked at my work, I was reminded of the quote by T.S Elliot, ” we shall not cease from exploring, and at the end of our exploring will be to arrive and know the place for the first time”. Even though I was born with this gift, I felt a sense accomplishment, I was amazed (that I could do this), and they made me feel worthy. These paintings define me right now, but in five-ten years better paintings will define me, and THAT is the power of self discovery through ART.

HAIL ART!……long may it live (after the resurrection)!

I am not a hyper realist artist, and nor do I wish to be. However this is my attempt at painting in the hyper realism style, created through a master class workshop at The Art Academy (Adelaide based art school run by Robin Eley). What I wanted to achieve from the workshop was knowledge about form, and how this is created through tone and colour, and also mixing skin tone from the correct palette. We all painted the same painting from a photo, so I don’t know the woman (left side in case it isn’t obvious!)

Robin Eley is a generous teacher who happily shares his knowledge, and mastery of paint technique with a class of roughly thirty people, over a five day intensive workshop. He’s also a super cool dude who is living the dream as a successful artist in Los Angeles. I think it is quite safe to say that he still calls Australia home, and shall return to our fare shores once he has made his mark on the world. Other notable Adelaide artists such as Tsering Hannaford also teach at The Academy. The next up coming workshop is in January next year with David Jon Kassan and Shana Levesen. I highly recommend the Academy for those artists who wish to develop their painting technique. I thoroughly enjoyed the experience and the camaraderie gained by meeting other like minded souls. 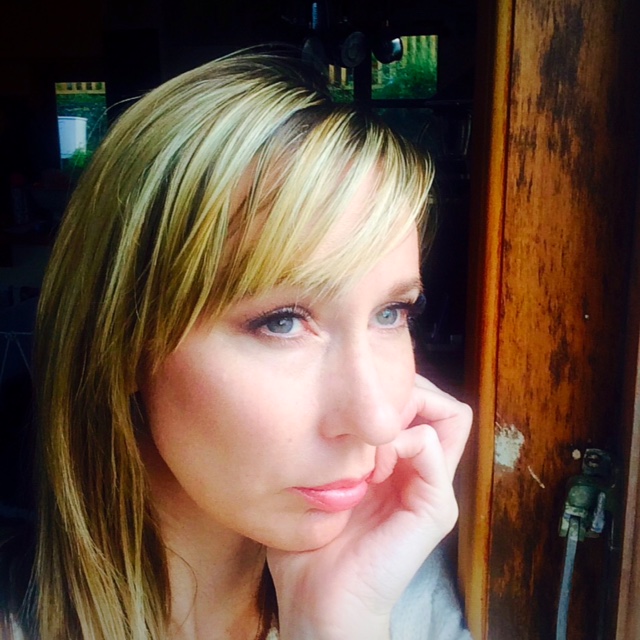 It is the anniversary of “when my niece came to stay”, a whole year ago. Winter can be quite heart warming when you have experiences like this…..

Whilst at the Academy of Fine Art in Florence, I undertook my first ‘site size’ portrait. Having always painted from photographs this is my first portrait done from a live model. It was a first also in that I had to draw with a paintbrush without having sketched her in charcoal onto the canvas first (which is how I normally work). Not only was I surprised at how easy it was, but also how accurately this can be accomplished with only the use of string for measuring, just as they did in the Renaissance era. The resemblance to the model was also uncanny and accurate. Yes I should have had her pose for the photo as per the portrait,…but you can see she was quite pleased.

Whilst studying a drawing and painting intensive 6 week course at the Florence Academy of Fine Art recently (October 2015) I drew copies from Charles Bargue (insert), which is the form of art practise undertaken at these atelier schools. Copy copy copy for practise sake. The drawing on the right however is one I undertook upon my arrival back in Australia, drawn in the same method with reference to my past wine label experience and the filigree work I used to do. It is a combination of the wonderful inspiration taken from tapestries fabrics and sculpture experienced whilst in this magnificent medieval city of art. The medium is pencil, acrylic, and gold leaf (from Florence) on cold press artboard.

Defiant and proud in her art of dance, as in life itself, we need to find that place where we flow.
After two years of study at art school, I got the worst grades ever! Dejected, I spent my holidays painting for me, just me. I painted to prove to myself that I could! And this is the result, my best painting yet! More to come hopefully.

{ TYCHE is the Greek goddess (or spirit) of fortune, chance, providence and fate. She was usually honoured in a more favourable light as Eutykhia, goddess of good fortune, luck, success and prosperity.}

To quote Picasso “there are two types of women, Goddesses and doormats”; I have referenced Tyche as an exemplar to depict my personal current status in the world.
It is therefore both ‘private’ and ‘public’, and has significant relevance to the life drawing class for which this is my proposal of work, and which fits the brief of developing a ‘private and public’ exhibition standard artwork.

As I stand triumphant on my plinth, conquering the doormat, I am imortalised as “the Goddess”, reclaiming my life through art. Like Tyche, I am blindfolded, hence not knowing where I am neccessarily going, but have blind faith in myself for that fact alone.

Alone indeed, my current need for solitude is proven through this large as life self portrait, painstakingly measured for accuracy and scaled up from an A4 photograph of myself in the proposed pose (albeit standing on a Dulux paint tin). The drawing is 2.5 metres tall, drawn with oil pit pencil on 300 gsm water colour paper. When I view it, I appear larger than in life! Perhaps this thing called art, is larger than I anticipated! In a state of continual inner dialogue, I have applied an existential approach to my life through the strong choices I have made and in particular over the period which is (now) growing into middle age.

The picture has been sexualised, as I am naked but for my painting apron (a befitting paradoxical approach to life drawing and domesticity) wearing high heels and earings, (which are a large part of who I am). I wear these ‘things’ which adorn greek coins as a symbol of money being attracted to me through my craft, therefore belief in what I am doing.

I stand defiant with my paint brushes in the stance of ‘liberty’. Finally I have returned!

Note: I acknowledge that this was created during the life drawing second year class, with tutor Chris Orchard from Adelaide Central School of Art.

Second year at Art School (ACSA) promotes a healthy dose of experimentation, by copying our chosen mentors style, hopefully and eventually our own will shine through. Rather than fine tune the exacting and precise art of figure sketching as we see and know it, measured, precise, but BORING, our initial sketches are fed through another artist ‘filter’. As if we are literally channelling that person in a spiritual sense. (I will be the first to admit that there will never be another artist as brilliant as Brett Whiteley from Australia)

To initiate this process I have copied one of Brett’s sketches as closely as I can (middle drawing). Then I used that technique to transpose my sketch into his style. I love the result, and how it all flowed, easily, effortlessly…but more importantly I can feel my voice shining through. It’s not a Whiteley, it’s me.

Note: I acknowledge that this was created during the life drawing second year class, with tutor Chris Orchard from Adelaide Central School of Art.

This is a study of how an oil painting is constructed. This particular exercise was about the fall of light, so our model had quite a harsh light directly above her left shoulder, which cast interesting shadows over her body. We also had a different model for the second half of the exercise, painted over a full term of 8 weeks at ACSA (Adelaide Central School of Art), which is evident in the slight change of body structure. I chose not to include the head knowing that this change was going to occur. Firstly we begin with a charcoal sketch on paper which is then transferred onto the canvas via a grid method. The second stage is the Grisaille (or underpainting) which is where I sometimes feel my paintings are at their best, because they are quick brush strokes with not too much detail applied. The final painting is created in the Alla prima style; directly applied paint rather than building up the layers.

Note: I acknowledge that this was created during the life painting second year class, with tutor Rod Gutteridge from Adelaide Central School of Art.